There’s a moment tonight which may be the most hopeful, beautiful thing I’ve seen in 20 years of gig-going at the Brixton Academy. Frank Ocean stands on the stage, almost nakedly vulnerable in a fierce red spotlight, singing the heartbroken words to the lush, trembling “Bad Religion”. And he’s joined on every bruised note by almost 5,000 people, audibly aching with him as he describes the pain of trying and failing to make a man a love him back.

Big deal, you might say, particularly if you’re in your late teens or early twenties, like the vast majority of tonight’s fervent audience. But let’s just take a moment to record what a big deal it really is, how far we have come. Practically the first gig I went to was Suede in 1992, when the dissipated glam rockers were rowdily taunted by the crowd for their homoerotic flirting (which the band soon abandoned, chastened). 12 years later, I found myself in a furious argument with three drunk Northerners at Leeds Festival after they spent most of Franz Ferdinand’s set jeering anti-gay idioicies at the band, who’d made the mistake of addressing one lusty song to “Michael”.

So watching Frank Ocean being not just accepted but adored by tonight’s crowd – which is so young and so eclectic, drawn from every race and background – feels like nothing less than utter vindication. Maybe The Beatles were right, after all. Love is all you need. Well, that and remarkable courage. Long time Pop Lifer readers will know that it was Ocean’s love letter to his first, male love that first inspired this blog, so tonight felt particularly special to us, seeing his courage rewarded with love and success, not the hate and failure he must have feared.

Having taken a moment to celebrate this beautiful victory, let’s move on. Because another part of Frank Ocean’s triumph is that he has managed to make a public stand over his sexuality without letting it define him. The radiance of his all-conquering album “Channel Orange”, with its extraordinary emotional and musical range, has won him a devoted fanbase which reaches out into every permutation of sexual and racial identity imaginable. Given the fact he’s yet to score a proper hit single, the hysteria which greets him tonight is startling: the foot-stomping chants of “we want Frank!” before he takes the stage, the shrill Beatlemania screaming between songs, the warm swells of love when he shines his shy smile down from the stage. 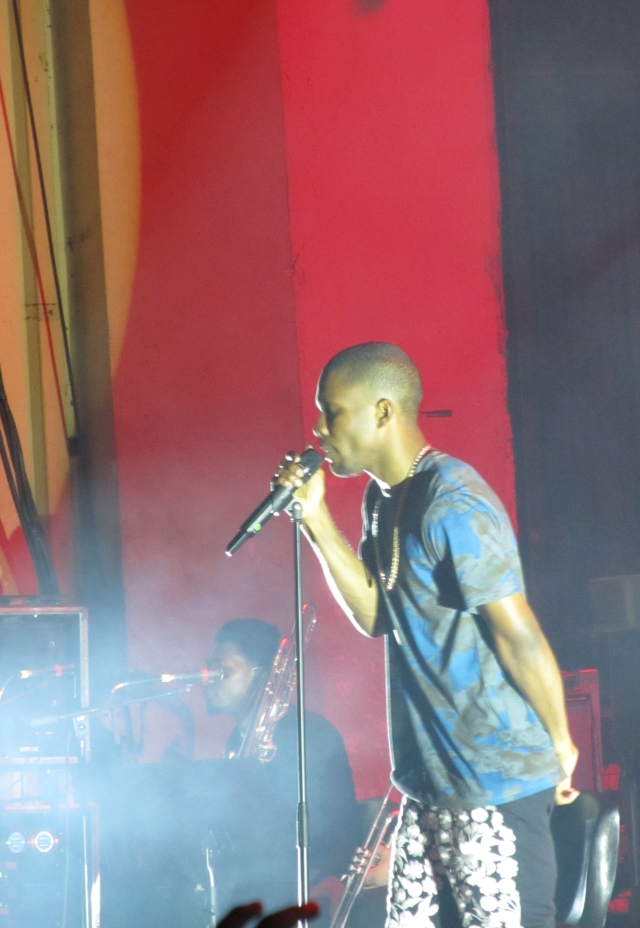 His ability to connect with so many people, to topple walls with such quiet grace, is clearly connected to his most extraordinary gift as a songwriter, his empathy. He can be a confessional singer when he wants – as on “Bad Religion” or the stunning suicide daydream of “Swim Good”, which he sings accappella joined by the whole crowd. But he’s just as emotionally powerful when singing from within other people’s lives. On the stoned stroll of “Super Rich Kids” he sings about aimless existences cushioned by money and numbed by drugs, while on “Crack Rock” he turns to the opposite end of the social spectrum, singing of crack addicts living gutter lives with real anguish and understanding.

Tonight is not a perfect performance. Ocean is not a natural stage performer, and spends as much time staring at his feet as looking out at his audience, although his occasional awkwardness is part of his charm. When this unshowiness is coupled with less sharp songs, like the meandering “Sierra Leone”, the early part of the show drags. But a stunning closing half – which takes in the lovely lope of “Forrest Gump”, the piercingly beautiful “Wise Man” and a rapturous, adventurous “Pyramid” – more than compensates.

In one of the few moments when Ocean talks in between songs, he talks of a Church he once went into New Orleans, where people were encouraged to tap their neighbours shoulders and tell them they love them. He encourages us to do the same right here. There is a moment of acute hesitation and awkwardness – this is London, after all, not New Orleans – and then people tentatively do it. A tall, blonde, young-Daryl-Hannah-lookalike next to me taps me and says “I love you, man”, and I grin, then pass it on to the dark haired older woman next to me. It’s a measure of trust and belief in Ocean that everyone braves the embarrassment and for the second time that night, I feel awash in hope.

bloggists at www.poplifer.com
View all posts by PopLifer →
This entry was posted in Gay shit, Music, Straight shit. Bookmark the permalink.