blurblog 2, second in our series on the long and tempestuous love affair between Britain and Blur. For blurblog 1 – go here. 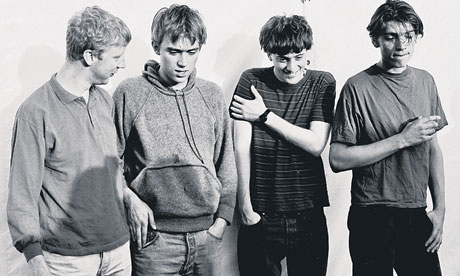 Writing this in 2012,  it’s astonishing to think how close Blur came to being a minor footnote in pop history, just another Airhead or Soup Dragons, with a single hit to their name followed by a rapid exit into the obscurity which is the fate of 99% of bands. Just as the Soup Dragons are most “famous” now because one of their members went on to become TV scientist Brian Cox, Blur could have become most “famous” because one of them went on to be a Labour MP. Because although Britain did fall in love with Blur in 1991, it was one of those brief infatuations that soon curdled into “what were we thinking?” scorn.

There are plenty of other websites and blogs recounting the early history of Blur, so we’ll be brief. We won’t dwell on Damon Albarn’s hippy childhood, his social discomfort in an Essex comprehensive school (which obviously shaped his uneasy songwriting relationship with the working class, his hunger to be embraced by the masses, while never quite preventing a sneer creeping over his features) or the outrageous musical talent he revealed from a frighteningly young age.

Others too have recounted Albarn’s pivotal meeting with Graham Coxon at school and discovery of Alex James at London’s Goldsmiths College, as well as the band’s early uncertain steps. It is worth briefly considering the band’s first name, Seymour, however. For decades, historians have entertained themselves by asking whether Adolf Hitler could have come to power and the horrors of WW2 unfolded if he had still gone by his family’s original name of Schicklgruber. Would the German nation have really been able to embrace the cry of “Heil Schicklgruber”? Similarly, could Blur have really become such a deep and engrained part of our pop life if they’d been called Seymour, could that name have been chanted across Hyde Park on Sunday instead of Blur?

Parlour games aside, the band got signed, and their label insisted on changing their name and rushed their first album, “Leisure”, into production. It’s worth taking a moment here to think about the musical world of UK indie which Blur emerged into 1990. If you weren’t around (lucky you!), close your eyes and picture a vast, muddy field, with only a few flowers blooming, far apart and forlorn. Got it? Then you’ve got British indie pop in 1990.

The “Madchester” scene of loping dance beats and mumbled vocals was slowly dying, while the hideously named “shoegazing” movement of FX guitars and sprawling dreamlike songs had produced some great music (My Bloody Valentine, Slowdive, some Ride) but was hardly chart-threatening, and was now providing cover for inferior plodders like Chapterhouse. Mediocrities like The Wonder Stuff and Kingmaker ruled the music inkies of the time, with only one band – the glorious, half-forgotten Curve – providing any music with real bite or glamour.

No wonder the NME and Melody Maker were so keen to embrace this new band of pretty young men (pretty despite the atrocity haircuts) and their gobby singer. Pitching their sound somewhere between the shuffling dance of Madchester and the FX fuzz of shoegaze, they also wrote proper pop songs. Their first single, “She’s So High”, was a strange and scuzzy beast, built on a brutally simple riff, and topped off with a cloud-grabbing chorus. It hit 48, and paved the way for “There’s No Other Way”, with its instantly recognisable hiccuping guitar riff, Charlatans-indebted organ and deliciously stoned vocal. It was a top ten smash, and Blur were suddenly tasting triumph for the first time, rushing eagerly between the pages of the NME and Smash Hits, revealing a capacity to play to different audiences that would be at the heart of their later monster success.

But all of this masked a problem. Apart from the two already mentioned, they simply didn’t have that many good songs, and this left their lack of originality cruelty exposed. There are devout defenders of “Leisure” among the Blur fanbase, but to these ears at least its status as the feeble weakling in the Blur back catalogue is obvious.

Third single “Bang” (a cruelly ironic title: “Whimper” would have been more appropriate, given its plodding tune and disappointing chart performance) was only the most obvious evidence of this, and at least you could hum it: other songs like “Fool” and “High Cool” were almost entirely devoid of tune or purpose. “Sing”, their most obvious step into shoegazing, was a thing of shimmering, mysterious beauty, and the hypnotic, looping “Repetition” lay down a blueprint to which they would return, but for the most part “Leisure” sounded aimless and obvious, the sound of a band with nothing to say (Albarn was publicly dismissive of lyrics, and little wonder, given the nonsense that he was spouting) but – more importantly – nothing new to sound like.

And so Britain fell out of love again. By March of 1992, when Blur joined the ill-fated Rollercoaster tour with their heroes My Bloody Valentine and The Jesus and Mary Chain, alongside US grunge pioneers Dinosaur JR, the band were seen – rightly – as the lightweights on the bill. It was probably awareness of looming irrelevance that led to the band’s alcohol consumption soaring hideously, and cajoled Albarn into attention-seeking stunts that – at this time at least – repelled far more than they attracted. They released a single to capitalise on the tour, and its terrible chart performance only confirmed that Blur had lost the public’s interest. The fact that “Popscene” was actually Blur’s finest achievement yet, a brutal, propulsive slice of mod pop, must have made this sting cruelly.

Then something worse happened. They were called Suede, a band Blur already had an intriguing relationship with: Damon had insouciantly stolen their lead singer’s girlfriend, Justine Frischmann. In summer 1992 Suede exploded into the music press with the force of a supernova, creating a rivalry which was even more crucial and deeply felt by Blur over the next few years than their later rivalry with Oasis. Suede, essentially, had everything Blur did not: a sleazy, sharp and adventurous sound that was utterly distinctive from the existing music scene, a singer with glamour to spare and an intriguing way with words, and – most of all – a vast stockpile of incredible songs. By the end of the year their astounding “Animal Nitrate” – a song about violent gay sex that crashed the mainstream courtesy of the most swaggering chorus imaginable – had hit top ten, and by the start of 1993 their album had hit number one.

Suede didn’t so much raise the bar for UK indie as snatch it and send it hurtling into the sky. Blur seemed unlikely to reach it, with their reputation as drunken, Camden-lurching has-beens now firmly established. But, as has been noted elsewhere, Damon Albarn is one competitive little fucker.

In 1993 the band re-emerged with a new single and album that sounded like nothing they had ever done before. In truth, the single – “For Tomorrow” – sounded like Suede, at least in its exaggerated cockney vowels, its millenial-angsty lyrics and its heavy deployment of “la la las”. But it also sounded rather gorgeous. And “Modern Life Is Rubbish” was a revelation, as focused and distinctive as “Leisure” had been sloppy and derivative. Heavily mod-influenced, bristling with insistent melodies, and full of fantastic songs that ranged from the rampant intensity of “Advert” to the languid and lovely “Resigned”, it carried almost no dead weight over its fourteen song length. Blur had proven that they were worthy of the British public’s attention again.

The British public didn’t seem to agree, sadly. If “Modern Life Is Rubbish” can now be pinpointed, along with “Popscene”, as the moment when Blur became Blur, its success was at best modest. Even the enthralling stops and starts and monster chorus of “Chemical World” couldn’t make it past number 28, the same disappointing position as “For Tomorrow”, while the album slumped to number 15. Even some very excitable press, and an increasingly devoted hardcore of fans, failed to turn “Modern Life…” into a success. It looked, frankly, like Blur had fucked it all up.

But as the band toured the album, slowly something shifted. One of Pop Lifer was at the Reading 1993 festival and already a cautious but intrigued Blur fan. Blur had secured top billing on the festival’s second stage, a fairly small tent, and probably should have counted themselves lucky to have landed that.

On the main stage The The were droning through their pomp-rock, so we made our way to the second tent, expecting a front row place for this famously fading act. Instead, the tent was rammed, hordes of people standing outside the tarpaulin, trying to hear the furious, brazen noise inside: Pop Lifer joined them. And then “Intermission” came on, its maddening hook speeding up from a crawl to a rampage, taking the crowd bouncing along with it. When it neared its crescendo, the momentum was too much, and at least half of the crowd were sent sprawling onto their backsides.

Pop Lifer – who like to think we know an opportunity when we see one – instantly threaded our way over the fallen bodies to the front, and were there for the thrilling final songs. Damon was on outrageously energetic form, pogoing insanely to “Chemical World” and surfing the crowd for “For Tomorrow”. For one whole minute he sat astride Pop Lifer’s shoulders, crotch alarmingly and thrillingly close to our face, as he led the crowd in “la la la”s.

We – along with thousands of others – left that night hopelessly adrenalised and wonder-struck. Surely a band that could do that could regain some kind of position in British pop. Maybe they’d even scrape their way back into the top ten again, as unlikely as it seemed…

blurblog 3 – where our heroes manage a small modicum of commercial success, coming soon.

bloggists at www.poplifer.com
View all posts by PopLifer →
This entry was posted in "Art", Blur, Music, Uncategorized. Bookmark the permalink.