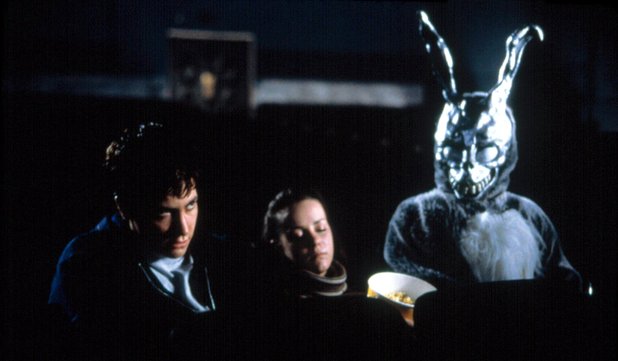 We often presume artists know what they are doing, that when we find a perfect pop song, a great album, an enthralling TV series or a captivating film that the person who created it must have either given birth to it in a miracle of inspiration or planned it out with the care of an architect. But sometimes we learn from the subsequent output of the artist that it isn’t so, that instead their moment of greatness was a fluke which they are incapable of repeating.

Tricky’s “Maxinquaye” is, arguably, one of these creations. Tricky occasionally wrote great songs after his startling, haunting, utterly original debut album – the seething angst of “Christiansands”, the crushed, stately beauty of “Poems”, the vicious swagger of “Tricky Kid” – but all of his subsequent albums were stunted creatures, hobbled by self-indulgence, lapses into ugly bluster and the stubborn refusal of inspiration to take part in proceedings.

2001’s “Donnie Darko” is another one of those glorious accidents in pop culture, an unrepeatable one-off. Director Richard Kelly was one of the most briefly-crowned geniuses of all time, dethroned faster than Edward VIII (less than a year). No sooner had “Donnie Darker” made its strange journey from being a weirdo film that the studio had no idea how to market, to limited cinema release, to DVD, to vast, zeitgeist-surfing cult success than Kelly began to make a mess of it.

First the director’s cuts of the film itself, which sprawled with self-indulgence and layered the film in sci-fi hokum that attempted to explain the film’s central mystery, but instead killed it dead. And then there was his follow up film, Southland Tales: if you are one of the 99.9999999999% of the cinema going public who decided to give it a miss, we urge you to reconsider. There is something hypnotic in its sheer, spectacular awfulness, the apocalyptic posturing, the brain-murdering dialogue (from the same man whose dialogue in “Donnie Darko” sings), the risible plot and the diabolical performances from figures such as Justin Timberlake and, yes, The Rock. Films should make our jaws drop open and Southland Tales does this, though in disbelief rather than wonder.

But let’s not linger on painful memories but instead remember the wonder of “Donnie Darko”, non-directors cut. PopLifer remembers seeing a cinema trailer for it and being deeply confused – was it meant to be a horror film? Eighties period drama? Sci fi? Teenage angst? – but intrigued enough to go and see it at the cinema.

We left with our tiny minds blown. The film proved to be all of the above, of course, but also so much more. From the ravishing opening scene – young Jake Gyllenhaal wakes up on the side of a mountain, dawn breaking and his bike by his side, unaware of how he got there, then cycles home to the sublime sound of Echo and the Bunnymen’s “The Killing Moon” – we were hooked. Over the next two hours we were enthralled, mystified, moved, frightened and finally heartbroken.

The film is of course a puzzle, like “Mulholland Drive”, with clues carefully placed. It is also a puzzle that makes perfect sense to us (spoiler alert) the story of an eccentric, loving and deeply unwell adolescent working out that he has no place in this world, but that he can leave it as a kind of hero. Think of Donnie on his bed in the film’s spell-binding final moments, aware of imminent death and laughing with glee and release while Tears For Fears’ brilliant “Mad World” is re-invented by Gary Jules as a funereal lullaby.

In between these two scenes lie some of the most original and lingering film-making of the last ten years. Visually the film lurches between the vividly bright (think of the glorious sweep through the school to the ringing tones of Tears For Fears’ sumptuous “Head Over Heels”) and the gloomily dark (see the above shot, which sees Donnie in the cinema, his girlfriend asleep, and Frank, his mysterious, rabbit-masked companion urging him on to righteous destruction). The mood flits between the comic (the family arguing hilariously in an early scene, Donnie nearly masturbating in his therapists office) and the tragic (Donnie’s terrible emotional confusion, the catastrophic final events).

At the heart of it all is Donnie himself, one of the most original and fully formed portraits of an adolescent in all cinema, nailed by a breathtakingly deft performance by Jake Gyllenhaall. If we didn’t know Donnie and love him, the film’s finale would not have the tsunami emotional impact it does.

One final moment will haunt us forever: a young girl new to town, Gretchen, stops by the scene of a disaster. A young man she has never met has died as the result of a terrible, inexplicable accident. We know, and she cannot, that in another world that dead boy would become her boyfriend and she herself would die as a result of a terrible accident. Because of Donnie, she will not. Donnie’s mother, face bathed in tears and shock, sees her and gives her the tiniest wave. Gretchen returns it, almost as if the two of them sense what has been lost and gained in Donnie’s death. Our hearts crumple.

bloggists at www.poplifer.com
View all posts by PopLifer →
This entry was posted in "Art", Film, Picture This. Bookmark the permalink.