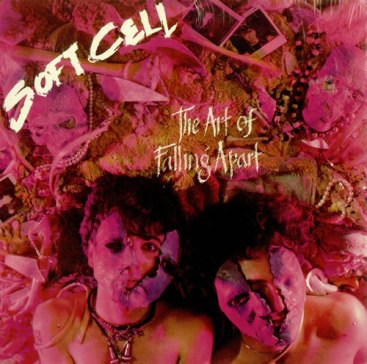 The second in a series where Pop Lifer tests music, film, television etc by the rules laid down in Lupe Fiasco’s “Superstar”: “Did you improve on the design?/Did you do something new?”. If the answer is yes to either of those questions, you qualify for the Lupe Fiasco Award for Services to Pop Culture.

There must be times when Marc Almond wishes he’d never heard Gloria Jones’ “Tainted Love”, let alone decided to cover it and give birth to one of the 80s most iconic and globally best-selling songs. Not just because it generated the fame and money that fuelled his later attempts at self-destruction, but also because its monstrous success and fame has for many eclipsed his own songwriting. Another great pop injustice, because Almond is an exceptional songwriter, as anyone who has listened to Soft Cell’s other great hit – the elegaic, magnificent “Say Hello, Wave Goodbye” – will know in their bones.

Its a songwriting talent on rampant form throughout “The Art Of Falling Apart”, the second “proper” Soft Cell album, and – in Pop Lifer’s view – Almond and Dave Balls’ masterpiece. On one level, the album sounds like one long attempt to strangle the albatross that is “Tainted Love” and all the fame that went with it. Black-hearted songs that sprawl over the five minute mark – many lacking identifiable pop choruses and neck-deep in themes of soulless sex and the ravages of abuse – seem designed to rid Soft Cell of the armies of hair-sprayed fans that flocked to their debut.

But Almond is simply too melodically gifted to completely abandon tunefulness, and many of the songs linger darkly under your skin like prison tattooes. If a song like “Babydoll” isn’t as shinily catchy as “Torch” it’s still sticky with blood and sex. This conflict – between Soft Cell’s increasing fear and loathing of fame, their desire to return to their art school roots, and Almond’s helpless pop instincts – resulted in an album that still went top 10, but failed to result in any top 20 singles, not even the album’s most accessible song, the magisterial, piercingly observed family psychodrama of “Where The Heart Is”.

What “The Art Of Falling Apart” lacked in instant chart appeal it makes up for in sonic pioneering. Ball and Almond had already proved themselves as early masters of the still nascent synthesizer movement, but on this album Ball begins to take synths to bold new levels. Listen to the seething, throbbing sounds that underpin “Heat” and you can practically hear Martin L Gore scribbling notes for use in later Depeche Mode. On the album’s most melodramatic song (and this is saying something in an album that bubbles and boils with more melodrama than a whole season of Bette Davis movies) “Babydoll”, Almond lets rip with a wailing diva vocal that could almost be Diamanda Galas, while the creepy use of soundclips would be borrowed by Manic Street Preachers for their terrifying “The Holy Bible” album and the menacing, brutal use of electronica would many years later be taken to even greater extremes by Nine Inch Nails.

On one song at least it is also a prophetic record. “Numbers” was recorded in 1982, when the AIDS epidemic was only just beginning to explode with its appalling, horrific consequences throughout the gay community. Little was understood about the disease at the time, so it’s difficult to know what Marc Almond knew, although his travels to the New York gay scene of the time may have meant he was one of the first to see the hints of what was to come. Either way, “Numbers”‘ description of certain aspects of early 80s gay culture paints an appalled and frightened picture of the emotional damage ceaseless promiscuity can wreak (“did you ask yourself where you let love go wrong with you?”) and in two lines truly terrifies: “you’re looking so thin these days, are you doing speed? No numbers/ Have you seen your face, you’re really going to seed? Playing numbers.” Of course, skeletal bodies and ruined faces would within a few years be a very common sight in gay bars across the world, soon followed by painful and lonely deaths. The fact that “Numbers” is so beautiful – Ball’s synths soaring plaintively in the refrain like a seagull – makes it all the more horrifying, and one of the greatest and most brutally honest songs ever written about gay culture.

If “Numbers” is the album’s finest and most lingering song, many of the others run it close. The bustling, nightmarish title track sucks you into a life of decadence which repels far more than it appeals, while the sweeping electronica of “Loving You, Hating Me” is more stately, though equipped with a lethal stilleto heel of a chorus. It is also as bleak in its assessment of relationships as the rest of the album is jaundiced about casual sex, and the opening lines are proof that Almond is a fantastic lyricist: “We’ve hit those depths again/ Playing black games again/ Blackmail and lies/ And the narrowing of eyes” (Neil Tennant may have had it in mind when writing the opening of “So Hard”: “I double cross you/ And you get mysterious mail/ I try hard not to shock you/ It’s hard not to with the things I could say”).

Not an easy album, by any means, but one that still sounds as fresh, lurid and adventurous as it did in 1983. If a great work of art is one that succeeds on its own terms, then “The Art Of Falling Apart” is a triumph, and one that deserves far more recognition.