02.12.12 – Pop Lifer’s Award Advent Calendar: The sitcom-in-waiting which is finally among us

Welcome to Day 2 of Pop Lifer’s advent calendar format. There is no indecipherable chunk of cheap chocolate behind these links – just 24 definitive moments that have grabbed our attention across pop culture in 2012. Yesterday, we awarded the Lady GaGa Award for Turning The Pop Video Into Glorious Art to Lana Del Rey’s magnificent “National Anthem”.

Today we turn to British sitcoms, a once endangered species which thankfully has, like the Blue Whale, been saved from extinction. Our second  Advent Calendar Award  “The In-betweeners  Award for a sitcom you can’t quite believe hasn’t been made before” goes to one very fine sitcom partially responsible for a restoration that has required no intervention from Sir David Attenborough…. 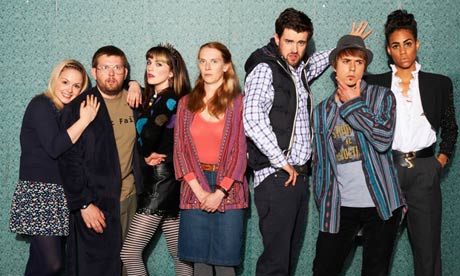 A sitcom about students is a ridiculously obvious premise. People thrown together from different social spheres without need for clunky exposition and centred around young types (which means young and beautiful to those marketing departments). Maybe the time limited aspect thwarted development at the long term business plan stage but, really, you have to ask, why has it taken so long?

(“The Young Ones” does not count; that wasn’t about students merely written by students as business cards for a precocious bunch of emerging talent. Plus although clever, it was stubbornly unfunny and contained not a single vagina of any note.)

Maybe we needed time for enough people to go to university to make it shared experience (45% of young folk and falling, cheers for that Mr Clegg). Maybe we needed writers confident enough to write young well, unashamedly. Maybe. Irrespective, “Fresh Meat” is now among us and no British sitcom has planted its first step so confidently on arrival. The first series was good; that awkward second series arguably even better.

The reason it works is because the show has been neither limited by tradition nor situation, so often the reason why even new sitcoms feel so staid.

It is a written that sitcom protagonists must not learn and be destined to repeat their mistakes. Students can’t abide by this rule because to do so would strike a horribly false note; 18-24 is where change happens at a breakneck pace.

So, instead, “Fresh Meat” has been plot heavy. Introducing characters, dispensing with characters, having characters neither settle or accept their shortcomings. We too are never allowed to settle into pigeon holes.

To find yourself moved to tears as Jack Whitehall’s obnoxious snob JP mourns the passing of his cold hearted father in the shower is not sitcom territory.  Within seconds though we are laughing again and by the end of his series on his side. To have Kimberly Nixon’s Josie thrown from her course, drink too much, behave recklessly badly, and try very deliberately to drag others down with her is not a Mike Leigh descent into a broken soul but a plot machine seeking no comfortable resolution or epiphany; only laughs, no matter how dark.

The greatest trick perhaps pulled by the show is that we are never allowed to forget that the characters are not adults playing students but children playing at being adults. The forming of a character, not the limits of a character, are what is the engine room for this fine, unique and brilliant sitcom. You never know what a character is going to do in a scene; cowardice, bravery, meanness, generosity, indifference are all available choices, all taken up at some point by all characters. Change occurs and there is learning but it is not mawkish (maybe “Modern Family’s” only weakness is its key change, off the stool closing sequences).

And amidst all this confidence and accomplishment, is perhaps the most welcome achievement  – an ensemble cast where the female characters are the funniest and most interesting.

So, Pop Lifer is thrilled to be able to give an award to an outstanding sitcom that can take its place alongside “Peep Show”, “Getting On” and “The Thick Of It” as one the best yet produced in Britain this century.