Pop Advent Calendar Day 13: the Ask Jeeves Award For Shining A Light Through The Amazing Vast Dark Universe Of The Internet

Welcome to Day 13 of our pop culture advent calendar… we’re over the halfway mark, people! Every day we’re handing out a little treat in the shape of a mini-blog on something or someone we’ve admired in 2012. Here’s an introduction to this whole advent calendar idea. Yesterday we celebrated Grayson Perry for his contribution to the ever difficult class debate in this country. Today we want to recognise someone who has done a remarkable job at helping us find our way to the most interesting and amazing gems of human knowledge on the Internet. 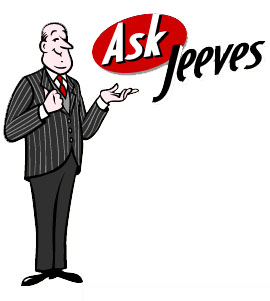 If you are one of the 43% of the world who are aged under 25, you probably can’t quite grasp how impossibly, immeasurably, head-spinningly different the world is now to the one you were born in. The past truly was a different country – we truly did do things differently back then.

It was a world where having regular contact with people in other countries was an exotic and expensive rarity. A world where most people still bought their news at a little shop down the road, neatly laid out in huge piles of paper. A world where making a decision about what to buy was either done in the ridiculous, Soviet-like paltriness of a “shop”, or by flicking through another big bundle of paper called a “catalogue”.

Do you want to know how truly insane this world was? Imagine you and your friends are in a pub on a Friday night in 1990. The talk turns to “Blade Runner” and someone points out that the writer was Philip K Dick, the same guy who wrote “Total Recall”. Yes, you say, who tragically died just a few days after he saw the film and never witnessed its success. Rubbish, returns another friend, he died before the film had even been made. The debate gets heated and big bets get placed on the outcome. But how do you sort out the argument to everyone’s satisfaction, presuming you don’t happen to personally know the world’s confirmed and undoubted leading expert on film history?

Well, you would have had to wait all weekend and then – on Monday morning – you would have had to travel to your public library. If, that is, you were one of the lucky and tiny minority of the world’s population to live close to a public library. You might have sought out a person called a librarian and explained your dilemma. She could have consulted a colleague with a little more knowledge, who would have pointed you to a rack of reference books on cinema. After an hour or so of flicking through these reference books you might have found a definitive answer. To provide evidence to all the people involved in the bet, you would have needed to take the reference book to the assistant who might – if you were in a particularly technologically advanced library – have photocopied the relevant page for about 50p. And then you could, if you wished, have faxed a copy of the document to each of your friends. If they had a fax machine that is.

And then the Internet was invented. Now we have Wikipedia and smartphones and the same argument would be over in about five minutes, with a bit of counter-quibbling over veracity of websites and quality of definitions. Simply put, the Internet has changed everything. Everything.  All human knowledge, insight, understanding, art and thought, all gathered together and made available to everyone who can access the world wide web, which is an ever growing number.

If you are 30 or older and can remember the information dark ages (for so they may one day be remembered) and thinking about all this doesn’t still make your head swim a little bit, well, you are taking a lot for granted. The Internet is a beautiful, life-expanding miracle.

Our award is named – with a little bit of generation X irony – for an early Internet search engine which promised to help us do just this. The idea was to Ask Jeeves a question in plain English, and he would take us where we needed to go through the much smaller universe that was the Internet of 1999. In fact, like most automated systems, he was pretty bad at it, but it was a nice idea. In the end – and there’s some irony here too – humans have proven to be the best, most discerning guides to the Internet.

Our next award goes to someone who has used Twitter – in many ways the most superficial and banal offshoot of the whole Internet – as a tool to direct her many devoted followers to things of wonder and beauty. She wisely and enthusiastically guides us to the prettiest and most shining stars of the Internet, and never leaves us staring dull-eyed into the void. She is…

@brainpicker. Who is the Twitter representative for www.brainpickings.org. Which is the brainchild of Maria Popova, an “interestingness hunter-gatherer and curious mind at large”.

But Popova’s biography or the medium she delivers in doesn’t matter nearly as much as what she brings to her readers and the enthusiasm with which she delivers them. “So great!”, “magnificent” and “yow” are among the headings for some of the 41 nuggets brainpicker has Tweeted in the last 24 hours alone.

The subjects those 41 Tweets link to range from the history of The Beatles in comic books, to Susan Sontag’s own personal commandments for being 24, to the daily routines of famous writers, to the neuroscience of optimism, to the correct approach to running, to Philip K Dick’s expectations for Blade Runner (which was of course released after his death). That’s 24 hours of brainpickings. Imagine that amount of sheer amazingness delivered every single day and you will have some sense of just how great @brainpicker is.

As the above should suggest, Popova’s amazing skill is to somehow find those little gems of the web – perhaps an article, a graphic or an animation – which illuminates knowledge in a new way, either by shining a light from a different and unexpected angle or uncovering something which had been buried in the dark of the past.

Of course, 41 Tweets a day is still a huge amount to process, particularly since you will want to read every single article brainpicker links to. The world may soon need a @brainpickerpicker in order to sift through @brainpicker’s Tweets and find the best of the best. But imagine how much we would never see at all without her. Maria Popova, Pop Lifer salutes you.

(And, by the way, Brainpickings is an ad-free site which takes 450+ hours a month to curate and edit, between the site, the email newsletter, and Twitter. Pop Lifer urges you to become a Member and support with a recurring monthly donation of your choosing, between a cup of coffee and a fancy dinner. Thank you.)

bloggists at www.poplifer.com
View all posts by PopLifer →
This entry was posted in "Art", 2012 Advent Calender, Miscellany. Bookmark the permalink.

3 Responses to Pop Advent Calendar Day 13: the Ask Jeeves Award For Shining A Light Through The Amazing Vast Dark Universe Of The Internet