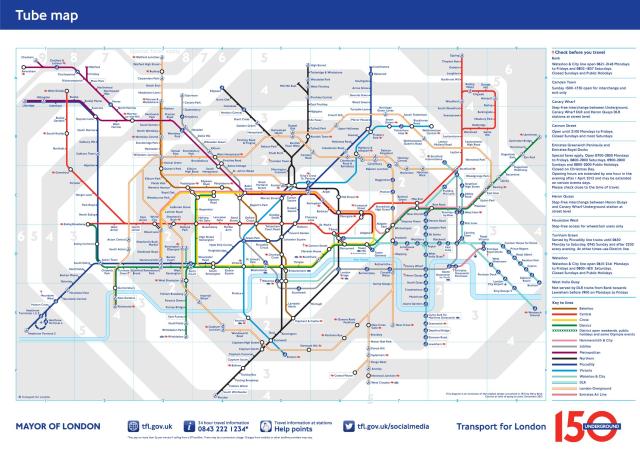 The London Underground is 150 years old today. For tens of millions of people across the UK and abroad the tube is a living symbol of the vitality and scale of London. It can be evoked instantly in the gorgeous iconography, from the London Underground symbol – that neatly bisected circle – to the feverish, evolving, insectile beauty of Harry Beck’s map.

All feelings which last for approximately 1 week of living in London, when the endless delays, the Kafkaesque nightmare of engineering works, the rusty decrepitude blighting swathes of the network, the endless push’n’shove of drunks’n’tourists and the sheer stressy hell of rush hour can permanently tarnish the brightest enthusiasm. And yet, and yet…

There are still moments where the London Underground briefly feels like a thing of wonder and beauty again. When the Victoria Line, the network’s unsung hero, swoops you from the deepest South of Brixton to the far North East of Walthamstow in less than 40 minutes. The sheer beauty of Clapham Common and Clapham North’s single platform stations, sleek cylindrical monuments to urbanity – when not filled by thousands of frothing commuters at 8.13 on a Tuesday morning. The long, steep elevator of Angel tube station, lifting you slowly towards the genteel bustle of Islington. The way that Canary Wharf’s vast cathedral interior prepares you for the looming sci-fi surrounds of Canary Wharf itself.

And then there’s pop music, where the Underground has continued to exert an alluring influence beyond what it actually has to offer. Hundreds of great pop songs have referred to the London tube, or places evoked by tube station names, from rusty old classics like “Baker Street” to modern gems like Duffy’s heartbreak lullaby, “Warwick Avenue.”

Pulp used “Mile End” as a symbol of bedsit London, teeming with seedy energy, while The Jam captured the menace of late 70s Britain in “Down In The Tube Station At Midnight”. Even Fergie (the pop singer and crystal meth bore, not the ex-Royal) had a clumsy crack at evoking capital class on “London Bridge”. Rather more memorably, it was the aggressive artificiality of Canary Wharf that inspired Radiohead’s sublime “Fake Plastic Trees”

Or there’s the Pet Shop Boys and their stunned, numb description of Thatcher’s London in “King’s Cross”, with the unemployed of the city lining up endlessly to feel the “smack of firm government”. An aimless, grim existence is summed up when the narrator “Found myself lost/ By the station called King’s Cross.” A song which was already powerfully evocative was lent an eerily prophetic tone when two months after its release King’s Cross Underground was the site of a terrible fire, one of the country’s biggest ever public transport disasters, claiming 31 lives. Music magazines at the time carried adverts to premium rate phone lines where listeners could hear the song, with the money from the phone call going to charities for fire victims.

Suede’s view was more romantic: no other band has worked so hard to invest the London Underground with beauty and meaning as the seduced outsiders from Hayward’s Heath. From one of their earliest b sides, “He’s Dead”, with its sloganeering cry of “all the love and poison of London”, through to the “maybe we’re just Streatham trash” sigh of “The Chemistry Between Us”, Suede have always placed themselves spider-like in the centre of London’s web. “Europe is our playground,” they once sang, but “London is our town”.

Tube stations feature in several key songs. In the melodrama of “Black or Blue”, Brett Anderson sings of a boy “who loved the sound of the Underground/ He left the coast and overdosed/ On that London sound.” In “New Generation” it becomes a place of drug-fuelled hedonism, hurtling the loved up from home to club, so “we shake it around in the Underground.” Perhaps most evocative of all is “By The Sea” where Anderson exploits the glamour of tube station names playfully in his tale of escape: “We’ve said our goodbyes to the Bank, left Seven Sisters for a room in a seaside shack.” They even filmed the video for “Saturday Night” in an underground station (video below).

Like the shipping forecast in Blur’s “This Is A Low”, these reference points become a poetry of place, add up to something more evocative and magical than is actually there. When Underworld try to do the same for the overground between Essex and London it simply doesn’t have the same resonance: these Underground stations connect places, but they don’t connect ideas, history and urban evolution in the same way pop songs do when they intersect with the Underground.

And this remains the best way to experience the Tube – filtered through the glamour of pop music, or captured through the artful lighting of film and television. The reality is grubbier, smellier and much, much more crowded. Yet for all that, the London Underground makes London possible, and for that we must love it, like a decrepit but loveable grandfather, lightly scented with the musk of lager and urine.

(We know we have missed many classics, so tell us your favourite London tube songs in the comments.)

bloggists at www.poplifer.com
View all posts by PopLifer →
This entry was posted in "Art", Music. Bookmark the permalink.