Billy Liar, a train ticket to the sixties – Picture this #15 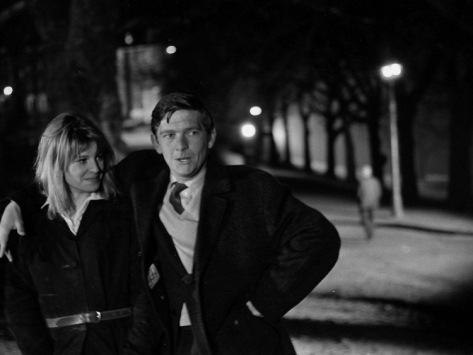 No one is entirely sure when the 60’s started. Famously, not even those who were there. The publication of Lady Chatterley in 1960; Ursula Andress in her bikini in 62; the Beatles’ She Loves You becoming the first of their many number 1s in 63. Pop Lifer has its own shortlist and Billy Liar is most definitely on it.

In it, a bright frustrated Billy, played touchingly by Tom Courtenay, corners himself. Sandwiched between a dull job and two unpromising relationships in a Bradford still under post-war reconstruction, our protagonist is offered a way out. And what an exit. Julie Christie’s Liz attempts to snatch Billy from his home town with a willing ear, a winning smile and single ticket to London.

Liz -liberated, handbag swinging Liz – confidently asserts herself, sexually and emotionally. She may as well have had ‘symbol of change’ printed on her forehead which makes Christie’s performance all the more remarkable. Liz may fail ultimately to uproot Billy but Christie’s genuinely charming performance overcame this heavy symbolism to propel her to the status of superstardom, icon and Kinks footnote. Within six years Billy Liar’s director John Schlesinger would be directing Midnight Cowboy. The 60’s sure packed in a lot of change and Pop Lifer would like to think, not of course having been alive in the 60s to judge, that Billy Liar captured this sense of change and crucially defined it not just by a time but location. It reminds us that for most people the 1960s were happening on the other end of a train line in London, or perhaps Liverpool, whilst the rest of the country got on with something else.

Billy Liar’s lasting legacy may not be as time capsule but tone setter. Appropriately, the film applies a very particular, northern English perspective on this keenly felt frustration and marginalisation mixed with a desperate need to be noticed. This perspective gives the film its potent mix of humour, violence, charm, petulance and pathos. A perspective reapplied two decades later by The Smiths and acknowledgedas much in this video to London which is as about as neat a synopsis of this great film as you’re likely to get in less than three minutes. Though we’ve tried, we’ve tried.

bloggists at www.poplifer.com
View all posts by PopLifer →
This entry was posted in "Art", Film, Picture This, Uncategorized. Bookmark the permalink.