We have a dream: our fantasy Olympic closing ceremony 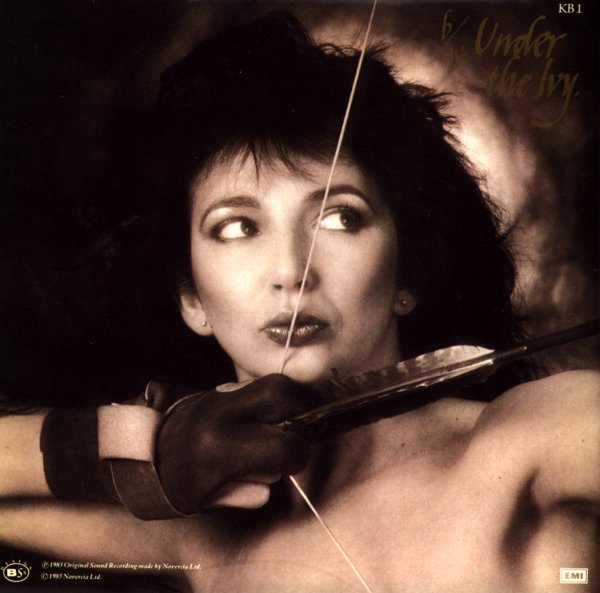 Kate Bush must appear tonight. This is not an idle threat. Image is cover of “Running Up That Hill”, courtesy of EMI Records.

We have a dream.

Anyone who has read this blog will be unsurprised to learn that tonight’s pop-themed closing ceremony has us gasping with excitement. If this blog hadn’t already been born less than a month ago, it would have to be now.

One of the many things Danny Boyle got right in his opening ceremony was the emphasis placed on pop culture generally and pop music specifically. Ever since the post-WW2 loss of Empire mercifully put us back in our place, pop music has been one of the few things we do really, really well, and if we must get all patriotic, there’s nothing we’d be happier waving flags about.

But as the rumours flew around over the last few days, as photographs leaked and big names were confirmed, our dream began to take shape. Our own, utterly biased, subjective and idiosyncratic idea of what out fantasy closing ceremony might look like, heavily influenced by the rumours. And it goes something like this…

The Rolling Stones have romped through “Paint It Black” and “Satisfaction”, to a backdrop of old people in understaffed care homes (Aidan Burley has set fire to himself in protest at this leftist subversion). Queen have blasted through the inevitable “We Are The Champions”, then surrendered the stage to their rightful heirs, Muse, who have answered with gloriously over the top renditions of “Starlight” and a knowing “Time Is Running Out”.

There have been surprises along the way. Nobody expected Depeche Mode to step up to represent the dark electronic streak in British pop with stadium-swallowing performances of “Everything Counts” and “Enjoy The Silence”, nor to collaborate with Goldfrapp on a ravishing disco-dazzled version of “Strict Machine”. Everyone knew George Michael would be there, but nobody expected him to sing “Praying For Time”, his impossibly beautiful and graceful beautiful protest song against materialism and spiritual emptiness, nor to be backed with sublime backing vocals from Boy George. And no-one had hoped that The Specials would make it from Hyde Park to the Olympic Park to remind us of the ghost towns once again sprouting like mushrooms across the UK.

Other moments have been more predictable, though McCartney’s versions of “Here, There And Everywhere” and “Can’t Buy Me Love” have been far better judged than yet another weary limp through that exhausted standard, “Hey Jude”. Pulp have electrified with “Common People” and The Prodigy and Blur, via a live feed from Hyde Park, have galvanised with a mash up of “Song 2” & “Firestarter.” And the Spice Girls – focus of so much scorn in the last few days – have won everyone over with raucous renditions of “Wannabe”, “Stop” and a perfectly timed “Spice Up Your Life” – “people of the world!” we all sang along jubilantly, as that first phase ended.

But now our fantasy truly begins. There has been a brief break in the performances filled by a medley of great British pop in all it’s joyousness, melancholy and oddity – with prominence given to those who couldn’t be here, the Lennons, Lynots and Bolans – while the big screen has flashed images from the games themselves: Bolt’s uncontainable charisma, Rudisha’s modest brilliance, Hoy’s easy natured and glorious exit, Ennis’ arms outstretched, dancing horses, Phelp’s geeky grin, Mo’s eternal smile.

Now the screens go dead. The lights are killed. A snaking, chiming beat plays. An orchestra swells. The lights go back up to reveal the full original line up of Massive Attack onstage, breaking our hearts with “Unfinished Sympathy”, long-nursed hatreds set aside. Shara Nelson’s voice seems bigger than the whole Olympic Village and is that Wild Bunch collaborator Neneh Cherry, brilliant internationalist Neneh Cherry, on backing vocals? Yes it is.

And then the crowded stage empties and one man steps forward, with a strange uncertainty. “Good times for a change,” he sighs, and the crowd erupts, as one of Britain’s truly great pop stars is briefly and temporarily forgiven for some of his more repellent public outbursts for the two short minutes of “Please, Please, Let Me Get What I Want”. “There, I’ve said it,” Morrissey tells us and exits the stage as a familiar, sinister, ever looping synthline begins to uncoil from the vast speakers.

Out steps a suited, smiling Annie Lennox to tell us that sweet dreams are made of this. Who are we to disagree? But then something amazing happens: Plan B steps out and delivers the furious rap from “Ill Manors”, while Lennox sinisterly “whoo-oooohs” in the background. “There’s no such thing as broken Britain, we’re just bloody broke in Britain” Plan B spits, reminding us that some people’s dreams are sweeter than others. The two share a strange, awkward stage hug and then depart.

It’s time for some pop joy and that can only mean the Pet Shop Boys. Circling in the already-famed rickshaws they deliver a super-medley of their many triumphs, taking in “West End Girls”, “It’s A Sin”, “Go West” (the athletes delivering the shouted chants: “together!”) and a version of “Always On My Mind” that is so adrenalised the crowd faint in their dozens.

Then the boys abandon their rickshaws and take centre stage to the jabbing synths of “What Have I Done To Deserve This.” Astonishingly, one minute in, a shape steps out of the shadows. It’s Kate Bush, taking over from the late, lamented Dusty Springfield and delivering a show-stoppingly intense duet with Neil.

Now Kate is on stage (for the first time since 2002) alone (for the first time since 1987), a living symbol of the wondrous creative originality British pop can achieve at its best. A drum loop as muted and instantly recognisable as distant thunder begins, and a distorted synth riff pierces the darkness. With images of extraordinary feats of athleticism from the games appearing behind her, Kate sings a desperate, riveting “Running Up That Hill”. By this point in our fantasy we are in tears of grateful disbelief.

And of course there must be a finale. Kate steps forward and shyly says, “and now I’d like to close this celebration of British pop with my idol and your idol, David Bowie.” Out he comes, exquisitely dressed, and leads us into a final glorious version of “Heroes” which is so soaring and so perfect we can forgive its obviousness, forget all our dark memories of the hideous X Factor version and simply sing along.

Of course, none of this is likely to happen, or at least not in the way that we imagine. But it isn’t completely impossible, either, and that’s proof of what an extraordinary miracle British pop music has been over the last fifty years, what absurd talent has been bred within the confines of one small island. All of the stars above are indeed British, though many of their parents and grandparents weren’t, and most of them have indeed been rumoured to be taking part tonight, so in theory our dream could become reality – in which case that huge explosion you hear at the climax of the ceremony won’t be fireworks, but the sound of our heads exploding in south London.

And, of course, this is only our dream, one tiny facet of the often glittering, occasionally rough diamond of British pop. Others will have their own personal vision of what the perfect celebration of British pop would look like. Some will imagine a much stronger focus on the sixties, where British pop reached its global commercial zenith, with the Rolling Stones and Paul McCartney taking their rightful place as headliners. Others will find all of this retro wallowing dull and maybe a touch white.

And that’s the astonishing thing. There are almost as many different ideas of what perfect British pop is as there are people. Nobody will be perfectly happy with what happens tonight, but surely almost everyone will see something that thrills them, that makes their spirit sing.

So we’d love to hear your fantasy closing ceremony. Put them in the comments below or email them to us at http://www.poplifer.com and we’ll try and post them as a blog later. We will of course be blogging the real ceremony itself, in the almost certain knowledge that there will be disappointments and unexpected joys.

But there had better be Kate Bush. That’s all we’re saying.

bloggists at www.poplifer.com
View all posts by PopLifer →
This entry was posted in Miscellany, Music, Pet Shop Boys, Sport. Bookmark the permalink.

2 Responses to We have a dream: our fantasy Olympic closing ceremony