The Thick of It, The West Wing and that “hopey, changey thing” – Omnigenius #3

Pop Lifer is celebrating The Day Today gang’s fearsome stranglehold on most that is good in British comedy. Part 1 began where it almost all began with “The Day Today”. Part 2 delved into the strange, fascinating world of Alan Partridge. Part 3 looks at the latest Iannucci project, “The Thick of It” – the brilliant and definitive modern political sitcom. It returned last Saturday and is with us for another glorious six weeks. 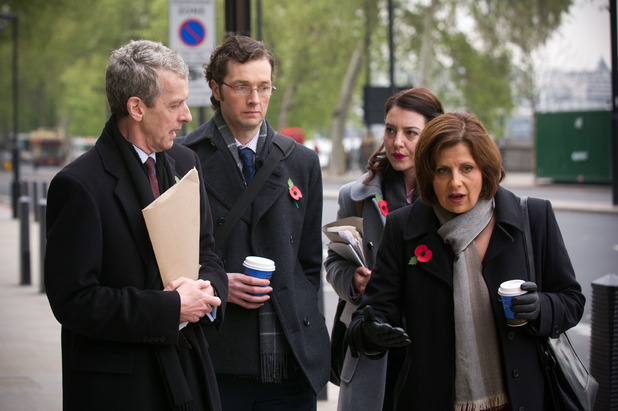 The Thick of It’s slightly superior red corner (political and comedic). Courtesy of the BBC

On one side of the Atlantic, there’s “The West Wing”.

Flawed heroes fighting the good fight, armed with an ever buzzing Blackberry and an endless stream of snapping-dog one liners. Mid-distance stares and healthy respect set to a stirring orchestra. There is a nobility in the pursuit of a better world even if the world remains stubbornly unresponsive. All this nobility is anchored by an intellectual heavyweight and the calming authority of President Jed Bartlet whose relationship with interns and cigars remains disappointingly platonic.

Then, in jaded, cynical old Blighty we have “The Thick of It”.

The political process is ridiculed. Motives are narrow and mean, and the noble pursuit schtick is the last recourse of the cornered rat. The show’s centre of moral gravity is not Jed Bartlet, but Malcolm Tucker, a spitting gargoyle. Hopes for a brighter future are replaced by scrambling for better headlines and/or getting one over the other guy and even these petty ambitions often seem beyond the reach of our protagonists. A better world is a long way off and can’t happen after 6 pm anyway because Terri’s blackberry is switched off.

“The West Wing” is far too idealistic, a liberal wet dream playing to an infuriatingly swelling orchestra, while “The Thick of It” is too cynical, playing to the baying pit. Both are distortions, of course. In a fascinating interview in last week’s Observer, leading politico Andrew Rawnsley spoke to Armando Iannucci, suggesting that “The Thick of It” was a corrosive agent, demeaning the political process with a level of cynicism that was probably unwarranted.

Actually, closer inspection reveals that “The Thick Of It” isn’t quite as jaded as it may first appear (nor, incidentally, is “The West Wing” quite as idealistic as you might remember, with the protagonists regularly dragged like moping teenagers back to the realpolitik of the hill.) Indeed, since the “The Thick of It” began to explore Conservative characters in addition to the Labour core, there has been a greater exploration of politics – marked most clearly by contrasting intensity levels.

The “red corner” believe in Government. It believes in its incremental ability to make society fairer, even if it is “intensely relaxed” about contracting out this ability to a private sector provider – hence the intensity of a Tucker and the harried desperation of both Abbott and Murray.

The “blue corner” don’t. They believe in freeing us from the state and see the role of elected Government as part crusading liberators, part benevolent landlords. Roger Allam’s Peter Mannion, very much in the landlord category, gets bored and heads off “for a Twix” at the merest hint of a hiccup (one of many magnificent lines from last Saturday). This contrast between the feverishly hands on and the languidly hands off have been contained within the same episodes until last week’s Conservative-focused opener, which, for many – bereft of Labour (and Malcolm Tucker) – fell slightly flat.

In Iannucci’s blue world, there’s no moral jeopardy; just tired cynicism delivered by great acting and great scripts. The Lib Dem “Inbetweeners” are now there of course, but the focus remain’s Allam’s Mannion. Had the show used a Conservative with reforming zeal, such as a Gove, there may have been less likeability but more dynamic – albeit uglier – comedy. The Ken Clarke model is used instead.

The Labour protagonists do actually believe underneath the more venal concerns, and it is funnier watching someone desperately try to maintain an edifice than tear one down. It is funnier and more dramatically satisfying to see nobility tested by fear than power wielded carelessly; to see good intentions cruelly dashed than bad intentions merely delayed. For all the f-bombs, Malcolm Tucker’s awfulness is often attributable to his fear and loathing of the Conservatives. His Tory counterpart Stewart Pearson’s motives are sandwiched between a patterned shirt and choice of tea leaves.

So in response to Rawnsley’s mild criticism, “The Thick of It” needs the hopey, changey thing after all, just as much as it needs its the sneer, our English default setting. Without it, it isn’t quite as brilliant.

bloggists at www.poplifer.com
View all posts by PopLifer →
This entry was posted in Comedy, Politics, TV and tagged Armando Iannucci, Malcolm Tucker, Peter Mannion, Rebecca Front, Roger Allam, The Thick of It. Bookmark the permalink.

1 Response to The Thick of It, The West Wing and that “hopey, changey thing” – Omnigenius #3