Pop Advent Calendar Day 8: Stick this on your mantelpiece

Welcome to Day 8 of our pop culture advent calendar. Every day we’re handing out a little treat in the shape of an award or recognition of something big or small in pop which has made 2012 a better place for all of us . Yesterday it was missing in action pop genius. Today we’re fulfilling that heavy obligation and handing out our Christmas Card. Of Sorts. There’s a little bit of an introduction here.

Christmas cards are an obligation and a balancing act. Nobody wants an essay about your past year; nobody wants a cursory scrawl with a kiss kiss tail. Do you get the bulk buy pack from the pound shop or the tasteful charity number which is thrice the price?  Yesterday, Pop Lifer was given some assistance into solving this seasonal conundrum.  Ed Miliband provided us with an example of what NOT to send. We will not impose the image on these pages (his children are involved and there is no need to spread the pain). However if you crave a-little-sick-in-the-mouth-cloying-self-aggrandizing-sentimentality, look no further than our Deputy Prime Minister, our Dad’s Army last line of defence against a rampant Tory government. 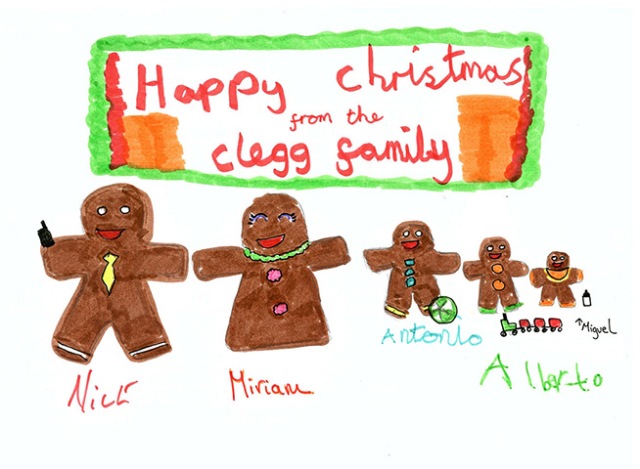 Pop Lifer has found a perfect solution. A 21st century solution. A Christmas Card via YouTube and one of our finest sitcoms…

“Getting On” has generated more copy than viewers.

By rights, this comedy set on a geriatric ward of a hospital blighted by double speak and outsourced NHS contracts, should already be one of those crossover hits from BBC3 or 4 like “The Office” and “The Thick of It.” It isn’t, and this is a massive shame because it is a delicately constructed, joyous, touching, warm, silly and brilliant piece of comedy.

Unfortunately, even more than the above, much of the copy generated seems to have lingered on the face that it’s a show written by and starring women. While this is understandable, Pop Lifer wished we lived in a world where this wasn’t worthy of note.

Based around two close colleagues played by Jo Brand and Joanna Scanlon, and the consultant they work for, Vicki Pepperdine, “Getting On” is nonetheless on to its third series. The premise is simple, the plots work to a shift pattern, and the arc iis carefully and delicately developed. There are men, of course, and if a gender political point is being made it is through the IMDB listings rather than the script. A suffocating, micro managed drill where form filling and IT issues occupy more time than dealing with patients, all points political or sexual are soon drowned out by the smell of antiseptic hand cream and bad tea.

“Getting On” doesn’t deal in idiots and gags but failings and a brilliantly slow but certain build. Friendships are warm, yet functional and occasionally cold. Like real working relationships, in fact, something so rarely captured in any art form.  It is difficult therefore to pull a clip from You Tube to illustrate why it works but,there are the odd stand out moments, like the one below when the image submitted to a hospital Christmas card competition goes horribly and hilariously awry.

And this of course makes it our own perfect 2012 Christmas Card to you. From everyone here at Pop Lifer, have yourself a very fine Christmas. we’re delighted to let you know that 2012 has been a great year at Pop Lifer Towers. Pop Lifer Next Generation are now on to big books and the cello lessons are an absolute joy. Little Junior was magnificent as a sheep in the Nativity Play and you’ll be pleased to know we have finally sorted the dry rot in the extension……..

Now put that on your mantelpiece.

This episode plays out to Joanna Scanlon (also astoundingly good in “The Thick of It” as Terri by the way) delivering a fatal diagnosis to a patient who had popped up throughout the series and who had been considered an attention seeking hypochondriac by all who encountered her.

On receiving the news, the patient breaks into a wide smile. The nurse asks if she wants her to stay and talk through diagnosis and the patient gently refuses, her smile fixed, she explains: ‘You see, I was right. I knew I was right.’

Very little TV this year, or any other year for that matter, has been able to carry off the classic one two pincer movement of laughter and crying,  the daft and the poignant so quickly and so beautifully.

bloggists at www.poplifer.com
View all posts by PopLifer →
This entry was posted in 2012 Advent Calender, Comedy and tagged Ed Milliband, Getting On, Jo Brand, Jo Scanlon, Vicki Pepperdine. Bookmark the permalink.

1 Response to Pop Advent Calendar Day 8: Stick this on your mantelpiece