Pop Advent Calendar Day 10: The Gary Lineker Award for the Best Second Best Player in the History of Football

Welcome to Day 10 of our pop culture advent calendar! Every day we’re handing out a little treat in the shape of a mini-blog on something or someone we’ve admired in 2012. Yesterday we celebrated the art of the political spat, perfected by none other than Stan Collymore. Behind today’s hard to find number 10 you’ll find yet another footballer – one who has perfected being second best like no other in history.  Here’s a little bit of an introduction to this whole advent calendar idea.

Anyone who was brought up in the 80’s and 90’s had a few incontrovertible facts to contend with. The Beatles were the best band of all time; Lady Chatterley sparked the sexual revolution and the Brazil team of 1970 was the greatest side of all time, spearheaded by the greatest player of all time, Pele.

Well you can scrap facts three and four. For a start, Barcelona are now the greatest side of all time and, secondly, they have the greatest player of all time at their spearhead; the mercurial, magnificent, joyous, record-breaking, outstanding, Lionel Messi.

Across the world we are currently becoming increasingly relaxed as we contentedly sit back with a brew as the removal men rearrange the football furniture. Season after season of tiki-taka and dribbling loveliness has seen Barca on their way to their sixth title in nine years, maybe their fourth European Cup in eight. Lionel Messi has goal and assist stats that manage to humble whole sides not just individual players. Only yesterday he broke Gerd Muller’s record for goals in a calendar year. 86 and counting. Yes, 86. Sunderland haven’t had as many shots on goal in 2012.

One man though is not that happy about this. One man would now rightfully be sidling up to Pele or Maradona in the mythical football hall of fame with stats and facts of his own which would make any player proud were it not for the lil’ guy.

Gary Lineker in his Leicester pomp (courtesy of the BBC)

This award was penned by Pop Lifer hero, Gary Lineker, in an inspired tweet. Reflecting on yet another bout of brilliance from this award winner, Our Gary wryly observed that this man is the Best Second Best Player in the History of Football. And he is…. 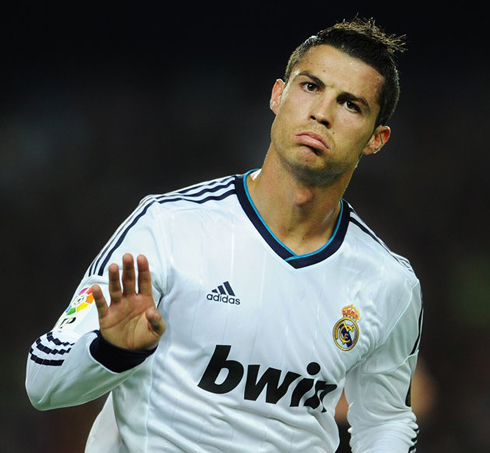 Ronaldo enjoying the silence at the Camp Nou

At only 27, Christiano Ronaldo has scored 285 goals for Manchester United and Real Madrid – 167 in three and half seasons with Real Madrid alone, more than a goal every game. He has a European Cup winner’s medal, titles from England and Spain and has already won 100 caps for his country, Portugal.

He is the world’s most expensive player and yet despite this price tag and statistics that more than justify it, very few people would consider him the world’s best. At opposition grounds across the world, his every touch is greeted with a mixture of boos and Messi chants. The second best player in the world is ridiculed simply for not being Lionel Messi. This is not a taunt Pop Lifer has ever had to contend with despite its obvious truth. It is unfortunate that Ronaldo has to at all. Unfortunate maybe, but inevitable.

If his reluctance to become a hero is precisely why Lionel Messi is the perfect hero, Christiano Ronaldo’s desperate need for attention and approval casts him as the perfect villain. In a narrative which demands a rivalry and a side to take, most take Messi’s, few take Ronaldo’s and his frustration at this situation only serves to widen the chasm. Ronaldo presents as petulant and needy; Messi pads along happy in his own skin.

Ronaldo is an extraordinary player. He would occupy the opposite flank to George Best in any all time United XI. Similarly, and only into his fourth year at Real, his name already slots along side Raul, Butreganeo and di Stefano. Not many players occupy plinths at two such great clubs.

He is blisteringly quick, his feet able to switch not just his own balance but that of a whole attack in a second. His shooting, heading, finishing and set piece delivery is deadly. Without him, Jose Mourinho’s reputation as a coach would be at risk of being irreparably damaged by his mixed spell in Madrid.

In private he is apparently dedicated and humble (tee-total, generous) but on the pitch he snarls, pouts and preens and for the most part seems to seek vindication from his success, rather than joy.

Ronaldo even managed to make becoming a father a source of scorn and scepticism.  Messi has had a son with his long-term girlfriend which he named him Thiago.  Ronaldo has named his son after himself. He has sole, full custody of Christiano II.

The rivalry is distorting at a personal level for both involved (Pop Lifer is sure Messi must forget to leave out the recycling occasionally) but it has helped to generate the greatest sequence of matches in the history of football.

The el classico’s between Barcelona and Real Madrid since Guardiola’s arrival as coach in 2008 and especially since Mourinho’s in 2010 have served up game after outstanding game. One of the most gratifying elements of this unfolding sequence has been Ronaldo’s contribution. At first seemingly over awed, he has becoming more dominant and occasionally triumphant. Ronaldo and Messi trade goals and assists almost at will. And we watch on – that cup of tea just tasting better every time.

The best football ever is being played with two of the greatest players ever on opposite sides fulfilling their billing. This is a good thing. And worthy of an award for the unloved Ronaldo.

After all we all know who is going to the given the prize for the world’s best player, the Balon D’Or, in January next year……

bloggists at www.poplifer.com
View all posts by PopLifer →
This entry was posted in 2012 Advent Calender, Sport, Uncategorized and tagged Messi, Ronaldo. Bookmark the permalink.