Howdy! Welcome to Day 17 of our pop culture advent calendar. Every day we’ve been handing out a little treat in the shape of a mini-blog on something or someone we’ve admired or thought worth noting in 2012. Tonight, though, we’re gonna stay firmly anchored in the present with our first ever semi-live blog. It’s an experiment, let’s see how it goes.

22.23. There’s lots of things to hate about living in one of the biggest, busiest, brashest cities on the planet, but if you’re a pop fan you really can’t complain. Every single night somewhere in London a major act takes to some airport hangar to blast out monster hits, while in dozens of smaller venues hundreds of extraordinary talents compete for your time every single day. It’s a city of superstars with not enough fame to go around, and we Londoners are spoilt rotten.

But some nights are a bit more special than others and tonight’s one of them, one that feels worth recording. We woke up this morning expecting a standard issue Monday: work, home, DVD, bath and bed by 10.30. But then we heard that one of our favourite pop stars of the last 5 years would be playing the 58 Sessions, a weekly night of eclectic pop in the Après Lounge – a West End venue which is so intimate you feel like you need contraception just to be here.

The star is Vincent Frank, AKA Frankmusik, and we shouldn’t need to explain who he is: given his copious talents, every single one of you should not only know it but already own his fizzily brilliant debut album “Complete Me”. But your loss is our gain since the fact he isn’t a household name (yet) means that we’re going to be seeing him play live from just ten feet away in the next hour or so.

22.36. But before that we’re seeing some of the support acts, which hammer home the embarrassing amount of talent calling our capital home. A small but enthusiastic crowd have heard soft folk, stripped down soul and some lovely acoustic balladry. Now we’re hearing Ashley, introduced by the compere as “one of the family”, who sings Alicia Keys’ “If I Aint Got You” with the sweet strong simplicity of the truly confident singer, one who doesn’t need to embellish.

22.50. Wow. We’ve not heard of Ike before, but he and his tight, kinetic band (who we think are called Life of Ike) has just played a romp of a set, fusing rocky raw energy with hip hop elasticity and some sweet, smart soul samples. There’s less than a 100 people here but the stage-prowling, shape-throwing, broadly-grinning Ike generates enough energy during three songs to electrify a crowd at least 20 times that size. Given that this is 2012 he ends his set by shouting out his Facebook and Twitter addresses: go and check him out at @ikesonthereal, we think he’s worth it.

23.30. And here is Vincent Frank, remarkably small (which is genetic evidence that he should be hugely famous) and sharply suited, smilingly taking his place at the keyboard. “I hope you enjoy the songs, they’re very depressing,” he wryly opens. And, for anyone who remembers Frankmuzik’s cult pop hits of a few years ago, the new material does indeed sound slower, wearier and sadder. After a playful burst of beatboxing, he opens with a stunning new ballad called “The Shores” which sounds as mournful, heartbroken and soaring as one of the overlooked glories from Keane’s “Under The Iron Sea” album. Sad, yes, but it’s hard to find anything so beautiful depressing.

Sometimes when you see someone live, even someone whose music you know, you gain a whole new understanding of their talent and tonight is one of those times. Frank’s an obviously gifted piano player, something you wouldn’t necessarily hear underneath the slick production of his records, and his vocals are full of power and passion. We have no idea what direction his wayward career will take next, but musically at least he’s sounding ever more sure of his path.

And now, with apologies, we’re going to sign off and just enjoy our unexpected adventure in pop. Even for a Londoner, this is a bit special and we’re going to soak it in – offline. Besides, we’ve only got 3 minutes til day 17 of our advent blogathon is over. We’ll leave you with an appalling blurred photograph as proof we were here.

(Oh, and if you’re ever in London on a Monday night, @58sessions is well worth your time. Amazing music, live and free – did I mention we Londoners were spoilt?) 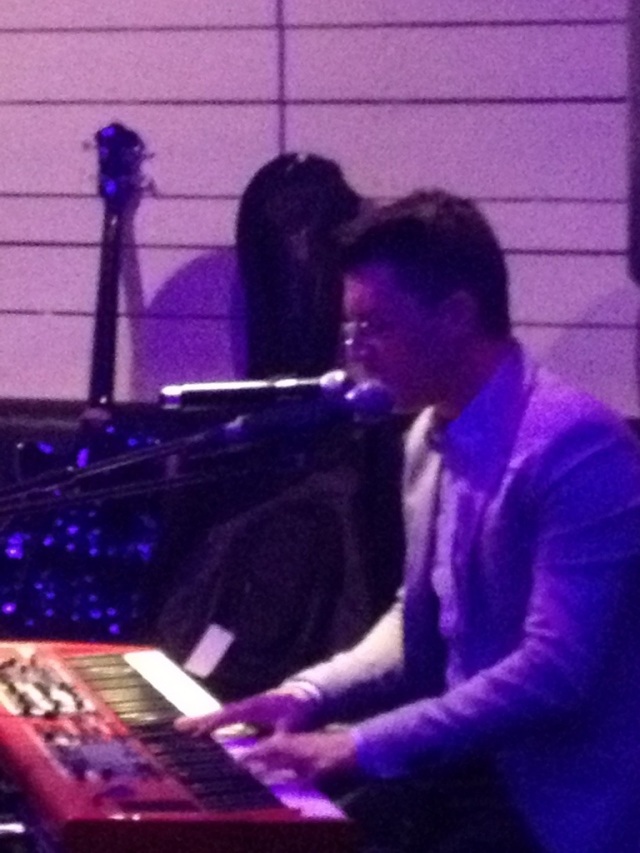 bloggists at www.poplifer.com
View all posts by PopLifer →
This entry was posted in 2012 Advent Calender, Music. Bookmark the permalink.